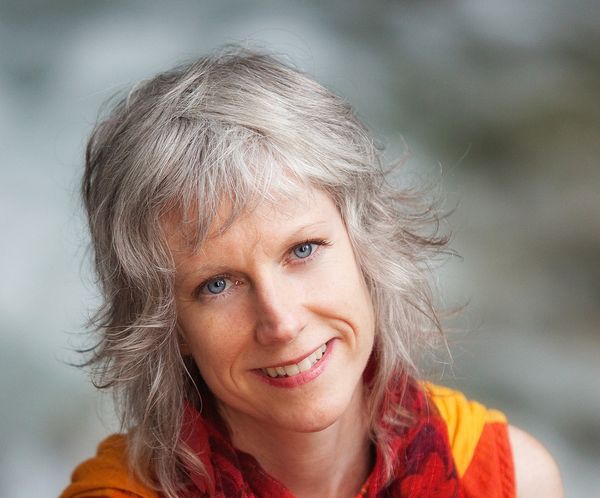 At a very young age, MJ was seduced by the magic of performing arts. Growing up near Montreal (Quebec, Can.), as a rather timid child and teenager, she was introduced to a multitude of classical disciplines such as ballet, piano and choir singing. These teachings presented her with the priceless ability to express emotions that words often could not. On the other hand, she felt uneasy with the stress of the “performing” aspect of the arts.
Later, as project coordinator, facilitator and support worker in diverse community organizations, longing to expand her comprehension of human nature, its splendors and its darker aspects, she started travelling along the path of Wellness, exploring Yoga, Taï Chi, Shiatsu, Vipassana Meditation, Personal Growth Conferences, Trainings and Workshops. A major shift occured when she was initiated to the Djembe drums in 1995. Fascinated by the powerful energy of the drums, she undertook a journey which would lead her to her life purpose. Under the care of Michel Séguin Jr. and others, she studied african drumming, and then joined diverse afro-cuban, afro-brezilian, afro-jazz bands, before creating her own Chanting & Drumming groups.

From 2001 to 2004, she studied with Lise Roy (Musique et Croissance, Montreal, Can.). Lise’s delightful creativity workshops and trainings provided MJ with tools that enabled her a deep exploration of parts of her that enjoyed the process of articulating themselves through musical improvisation, without the pressure of performance. More importantly, these sessions led her on the path to Awareness. There was no turning back: Mj felt the visceral calling to incorporate music with her work.

In 2004, she obtained a Bodywork, Energy Therapy and Taoist Acupressure Practitioner Diploma with Centre Tao School (Ulrich Freitag, Director). In 2006, she specialized in Sound Massage, with Pascale Mukti Beaudry. This training brought her to a new level: using sounds, along with massaging the physical body, as a healing method. She later persued other specialized trainings: psychic & rebalancing massage, as well as Sacred Syllables and Tsa Lung Bön Buddhist teachings. In 2008, she was initiated to Reiki; this opened the door to intuitive singing while she was channelling healing energy. Another major shift occured at this point: Mj's passion for the Performing Arts and the Healing Arts merged, and she allowed herself to trust that she was on the path to self-realization. She began offering Intuitive Sound Healing Meditative Concerts using her voice and drumming to groups and audiences in Québec (Can.).

In 2010, MJ relocated to beautiful British Columbia (Can.), where she was initiated to shamanic journeying, deepening her work as a Sound Healing Artist. There, her visions of travelling the world, recording and offering rebalancing music journeys were met by those of drummer, producer and multi instrumentalist Dean Richards. Married in 2016, the couple is now living their purpose together as Sacred Fire.